When A Female Serial Killer Is Investigating The Afterlife: Slights by Kaaron Warren Reviewed 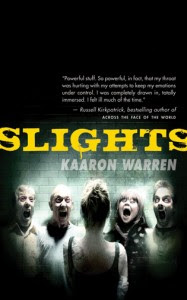 Slights is a very strong debut novel by Australian writer, Kaaron Warren. It is a creepy, highly distubing and excellent horror novel which was awarded the Ditmar Award and the Shadows Award for Best Fiction.

The main character, a young girl called Stevie, has a near-death experience, and when she comes back she remembers that she was in a dark room full of people. Everyone she ever pissed off was there and these people were torturing her. Later her main goal becomes finding out if this is really the place where everyone must go one day. The girl who had a troubled childhood gradually becomes obsessed with death, becomes suicidal, then starts to kill others in order to find the answers.

The book is a very well-written piece, it really manages to draw the reader in, but it is too gloomy, too depressing to be read too quickly. This is a  psychological horror piece and the author uses a sort of strange diary format to let us follow the events of Stevie's life. While trying to find out more about death and what comes after death, Stevie is also investigating family history and gets into all sorts of conflicts in a seemigly peaceful suburban neighborhood. The latter turns out to be a place where people prefer not to notice the crimes that are committed, because this is much more comfortable for them than any of the alternatives. (Scary, isn't it?)

For those fans of psychological horror who can handle disturbing reads and shocking imagery, Slights is highly recommended.

Popular posts from this blog

My poems appeared in three English-language anthologies.
The topics of these collections include empathy in art, the history of mankind, and the third anthology contains poems about the night sky.
I also had some poems, haikus in one local magazine and a short poem in a local anthology (in Hungarian).
I also started blogging again, posted some book reviews, and I also made some author interviews. (We interviewed each other with some local women writers.)

In 2019, I'd like to have more poems published, and I'd also like to work on some new short stories.
Read more

August 11, 2018
Two of my poems appeared in the latest issue of DoveTales. This is an international journal of the arts.
(Topic: “Empathy in Art: Embracing the Other”)
You can get a copy here.
Read more